Living in Morocco has taught me a lot. For example, when someone tells you no, you can’t do that, it often means that they’ve never heard such a request before so obviously it’s not possible. Insistence is key. Thus it was when I visited the Equatorial Guinean embassy in Rabat to apply for a visa: the Moroccan man on the front desk had never been asked about a tourist visa before, so I couldn’t have one. When I did insist, I was shown to the Consul’s waiting room. As I waited, I took in the decor: the plastic plants in the lobby were not quite in keeping with the glitzy gold-plated lift (so Trump Tower), marble floors and doors made of wood from EG. Several Moroccans came in to apply for work visas – EG crawls with Moroccans working in the construction industry. The Consul told me he couldn’t make such a decision himself and that I’d have to speak to the Ambassador. I was there again the following week to meet the charming young man who had, before this post, been a biologist at the Monte Alen National Park. He was really keen for me to visit his country and expedited the visa. No matter that I had to pay over the odds – 200 Euros instead of the usual 60 for African countries – and curiously got no receipt. Armed with this vital piece of paper glued into my passport, I boarded a flight from Casablanca to Malabo.

A visa entitles you to visit a country for a specified amount of time, right? Not so in EG. You have to have a tourist permit, too, that must list every place you intend to visit so spontaneity is not on the cards. I knew just where to get one, thanks to the Bradt guidebook I had with me, so set off in a taxi to the huge public housing estate opposite the Moroccan cement company headquarters set on a 6-lane highway. And there was the sign for the office, just where they’d said it would be. Except that no, it was no longer there, they’d moved – just across the highway and a couple of miles down, definitely not walkable. Fortunately for me, Equatorial Guineans are pleasant, helpful people and one guy offered to take me in his car. At times like these, warning signs flash momentarily through my mind, but I had not a lot of choice. Taxis on public housing estates are in short supply. The man was enormously helpful – staying with me for the hours it took to get this vital piece of paper. The new office was still being furnished, with Kitea vans (the Moroccan poor equivalent of IKEA) being unloaded outside. We found the right person, Elena, handed over the cash, the photos, the copy of my passport and the exhaustive list of where I wanted to go. Elena gave me an example of the permit in Spanish – I just had to go away and type it out with my name on it and take it back to be signed by the Minister of Tourism who wasn’t in the office right now. Not having anything to type on, I begged Elena to type it out for me. Fortunately I was the only tourist in the country so there were no queues of newly-arrived hopefuls waiting in the hall. With one finger and many start-overs, Elena produced the finished article within an hour, I signed it, and went away. I couldn’t leave Malabo without it. I went back much later that afternoon and the Minister had signed my permit. I’m not at all sure what would have happened if he’d been away on holiday or off sick. I immediately took 15 photocopies to hand to officials. There was one policeman, in the two weeks I was in EG, who asked to see it.

The knowledgeable Spaniard I met in Malabo who runs just about the only tourist agency told me that a large proportion of his clients visit EG just to get the stamp in their passport. A pity, really. I hope they do appreciate their visit – the country is beautiful and untamed, but lacks any kind of tourist infrastructure.

The current capital of EG, Malabo, perches on the northern end of Bioko Island. This island is located off the coast of Cameroon, quite a long way from mainland EG. You see, the oddities continue. A new capital is being built deep in the interior; vast swathes of jungle have had to be cleared for it. The president feels it will be better able to handle an increase in population than Bioko. Others feel that the president is wary of another coup attempt (there have been several, including the infamous one launched from South Africa that involved Mark Thatcher) and that a capital deep in the jungle will be safer. 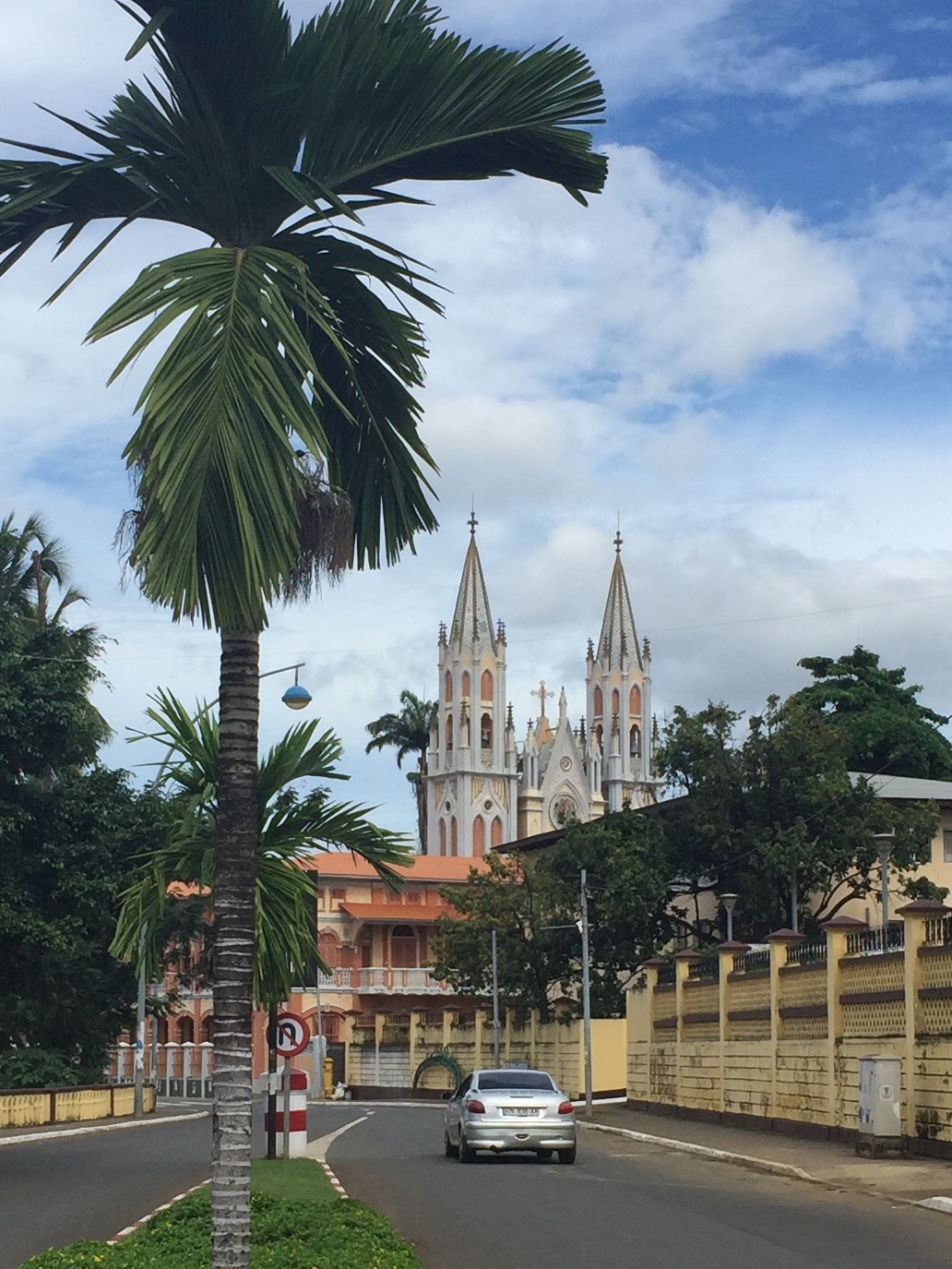 Malabo is a pleasant city, small and on the sea, with a sprinkling of attractive Spanish colonial buildings, including the beautiful Gaudi-esque cathedral. EG’s economy is based on oil and gas production and as the price of oil has dropped markedly over the last few years, so the big multinational companies are reducing their staff levels or moving out altogether. It’s not so remarkable, then, that the streets of Malabo are lined with smart 4WD vehicles all with ‘for sale’ signs pasted on them. Or that the hotels are 90% upmarket expensive joints for those on expense accounts. Most of the people are very poor; the oil wealth just doesn’t seem to trickle down to them. The rest of Bioko island is wild, sparsely inhabited and very beautiful. Stately ceiba trees dot the edges of the rainforest. In the far south, where the sand is black, there are turtles that come up the beach to lay their eggs. There are few places to stay outside Malabo. 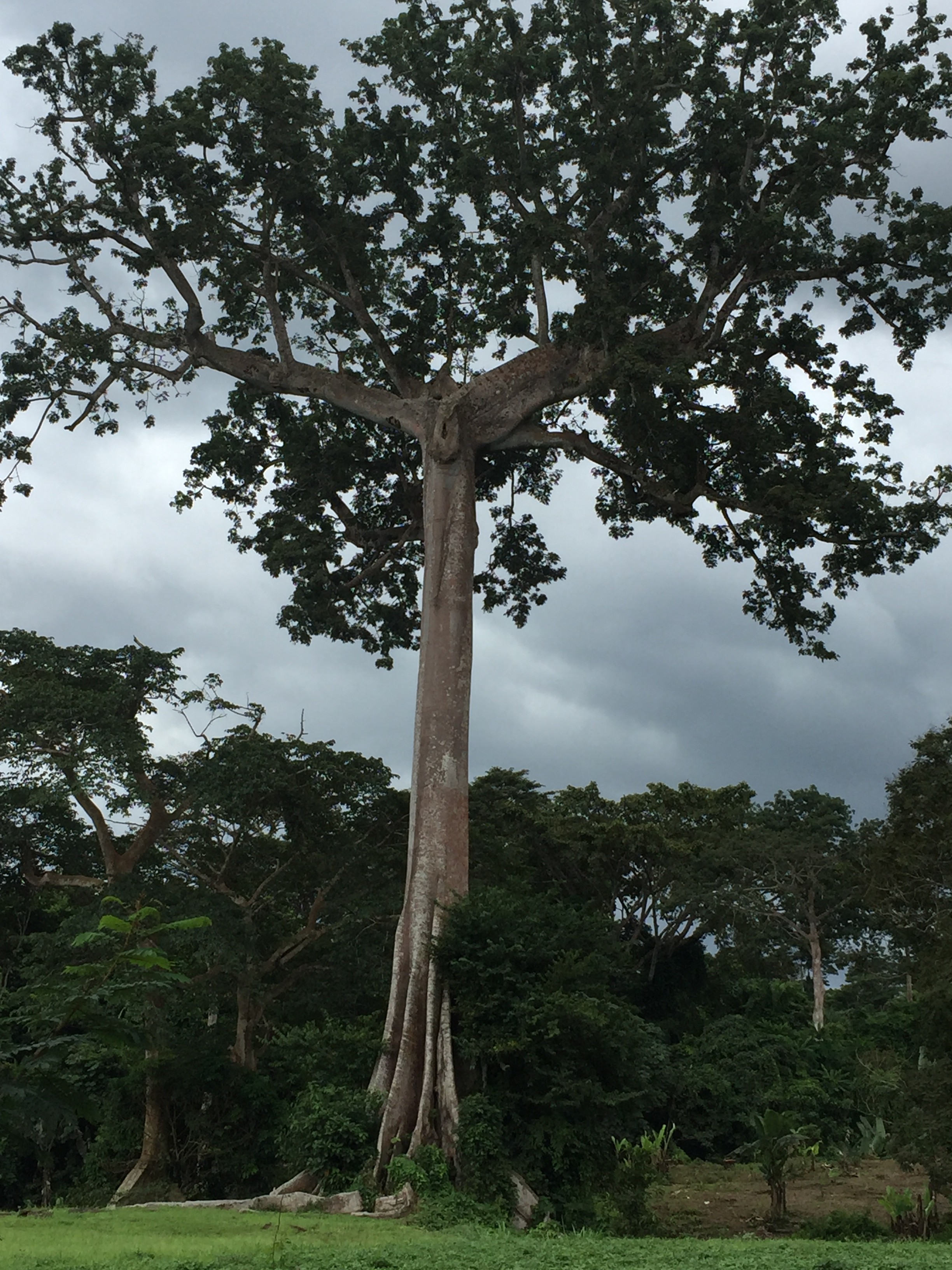 The mainland, known as Rio Campo, is accessed via a 40-minute flight to the second city, Bata. This is missing its former oil execs even more than Malabo. Hotels and restaurants are empty. I was offered a 40% discount on room and meal rates before I’d even asked the price. And yet those meals weren’t really available. One morning I enquired after breakfast, but there wasn’t any. 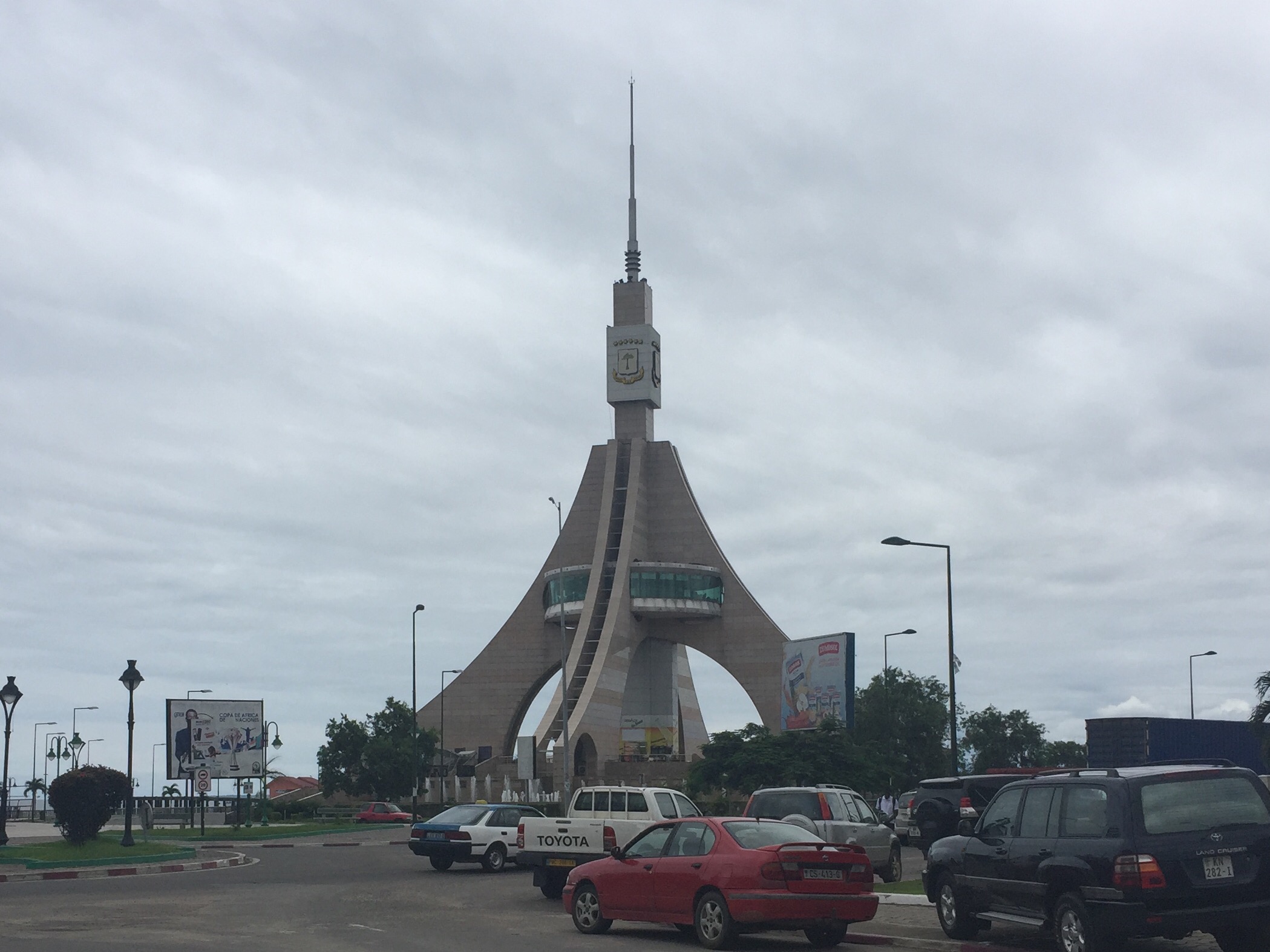 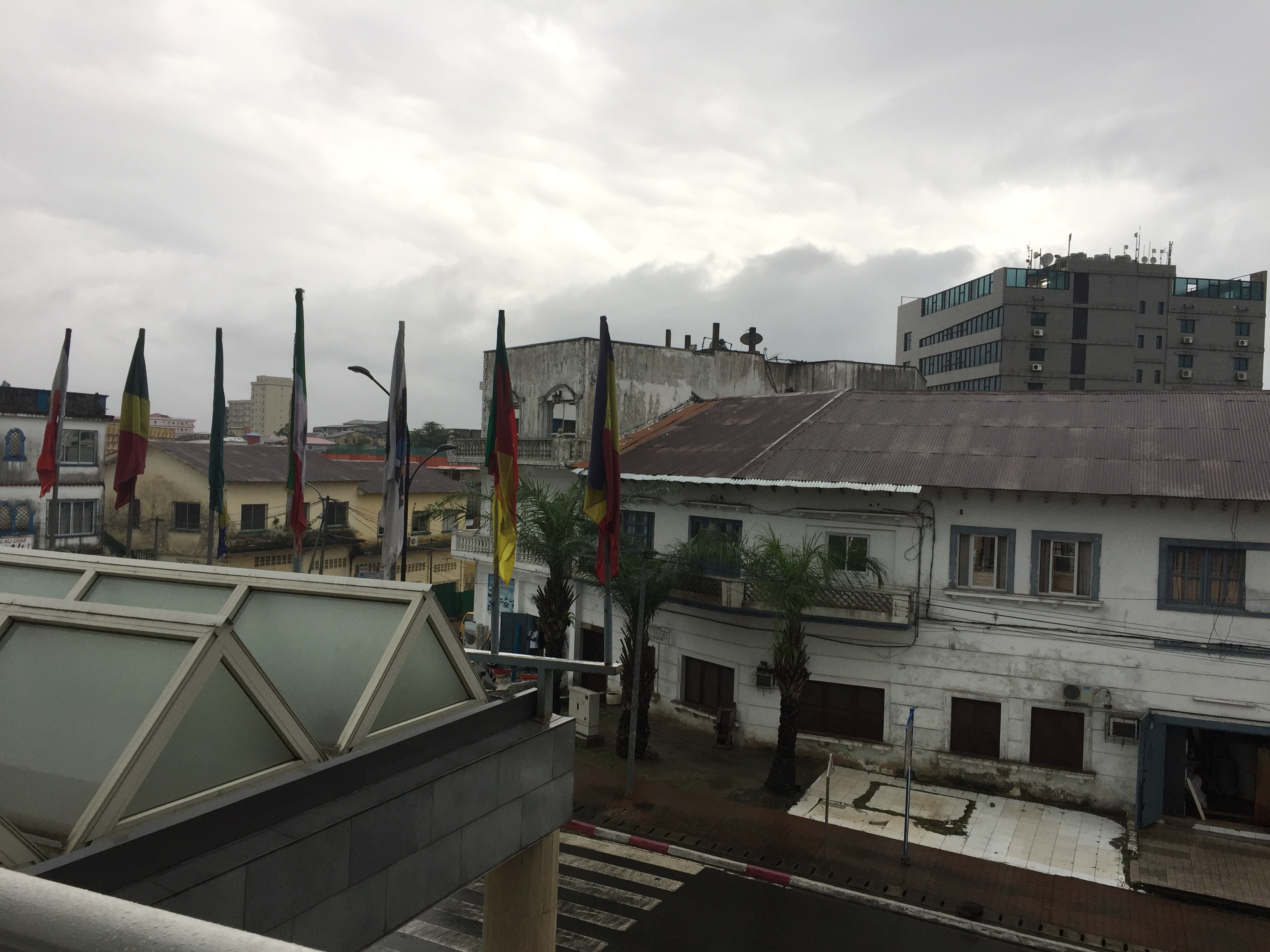 I went further south in a taxi to explore. I stopped over in a resort that must once have been pleasant, but now toilets leaked all over the floor, the swimming pool was cracked and the water in the bottom attracted zillions of mosquitoes, the chairs under the thatched umbrellas were broken, cigarette butts littered the grass and the food was bleak. But they did have an effective way of dealing with the leak – they turned off the water supply to my bungalow. The beach must once have been pleasant when lots of people visited at weekends, but now was full of garbage.

If you want to get to Corisco Island, said to be a paradise of beautiful beaches, you have to beg passage on the Moroccan supply ship that plies the waters every day except Sunday. There’s no charge, but when you get there, it’s a very long walk to the only village with a hotel. Maybe you’d get lucky and a Moroccan lorry driver would take you. There’s a huge airport there that was built to deal with thousands of tourists who would visit, but it doesn’t have an air control tower yet so has never been used.

The country’s premier nature reserve is Monte Alen. A hotel was built, an education centre, guides trained … and yet, today it’s abandoned. It never opened. Local people have turned to poaching, so the animals have retreated to the depths of the forest. If you do manage to arrange a trip into the forest here (and those guides are still hanging around, waiting), you need two weeks and all equipment and food. I’m sure it’s worth it – there are gorillas, elephants, wonderful birds, chimpanzees and other primates. In Malabo, I visited the director of the park to ask about permits. I thought he was going to cry with frustration. He can sell you a permit but nothing else is available.

The ambassador in Rabat had told me about the country’s Horizon 2020 vision – that tourism would open up, offering an alternative source of income. It’s so sad, as it could all be so much better.

Potting about in the Rif Mountains of Morocco