On a chilly, damp Tuesday in April, I set out early with New York ceramicist and sculptor David Packer into the foothills of the Rif Mountains in Morocco. Usually April is warm, sunny and spring-like, but this year it was very wet indeed.  David was in Morocco to finish research on his forthcoming book on local ceramics, and we hoped to find some of the last remaining women potters of the Rif.

Our driver took us just short of 100km northeast of Fez on the A2 national road, with its beautifully designed bridges, to the town of Oued Amlil (population about 10 000) where a souk brings the agricultural centre to life every Tuesday morning. Avoiding the worst of the thick mud, we ventured into the souk and hoped it wouldn’t rain any more. It was one of the largest souks I’d seen, when people come from villages all around to buy, sell and meet their friends. And yet, I saw no women at all, not selling at stalls, and not buying, not even looking. 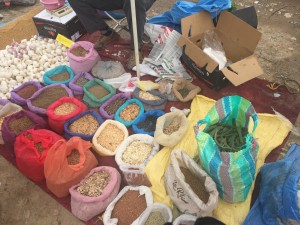 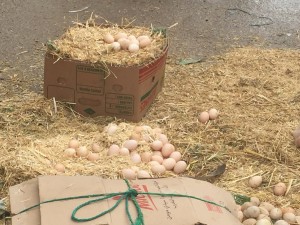 Armed with a photograph of the pottery we were seeking, we eventually found a few items made by Riffian women. They are hand-made (not thrown on a wheel) and unglazed, with simple black decoration. But there were no women there selling them; men on the next stall took charge of them, and told us the women were not at the souk today. We’d have to look further. 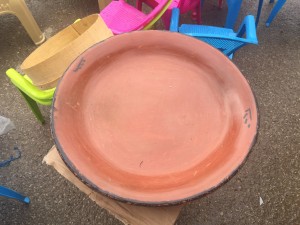 Unglazed, hand-made dish of red clay, about 45cm in diameter, with simple black paint decoration. For making couscous or bread.

Buoyed by our success, we returned to the car just before the heavens opened again, and now headed to the village of Had Oulad Zbair, just north of the national road. David had a map hand-drawn by Hammad Berrada, a writer and expert on Riffian pottery. North of the A2 was the home of the Tsoul tribe whose women were known to make this pottery. In the village, we stopped for a welcome coffee, though most of the other café customers were augmenting their coffee with hashish, that other famous product of the Rif. It was either mixed with tobacco and smoked in a cigarette, or provided a quicker hit in a pipe. But everyone was mellow and happy this Tuesday morning. As before, David showed the men his photo. Ah yes, they said, I remember that stuff. The old women made it … But nobody around here makes it any more. 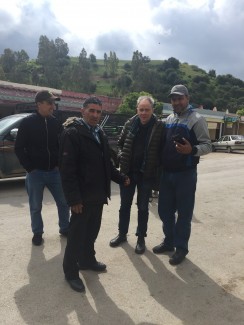 Two locals (left) discuss where such pottery might be found, with David Packer (third from left) and our driver, Mostapha

We had to conclude that our pottery was now extinct among the Tsoul tribe of the Rif. However, the Ghriata tribe south of the national road could still prove worth visiting. We headed south into the breathtaking scenery of the Tazzeka National Park. Driving along this scenic road near the village of Souk Sebt Bouchfâa, we spotted a large stall selling pottery, obviously intended for tour buses. We stopped here and were disappointed by all the usual stuff from Safi and Salé and Fez. But in amongst the brightly coloured ceramics were some perfect examples of what we were looking for. There were two different types, some dishes similar to that which we’d seen at Oued Amil, and some pots with lids that were more like casseroles. 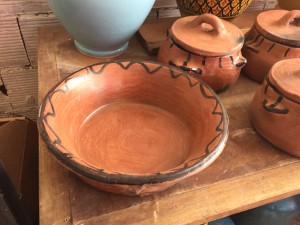 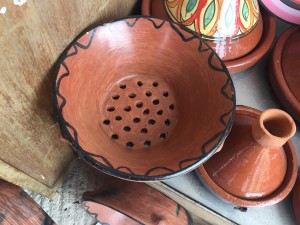 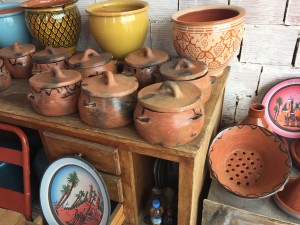 David bought a lidded pot for our friend Jess Stephens in Sefrou and I bought a dish. Considering the stallholder was making a profit, the prices were ridiculously low. We asked the stallholder, of course, where we might find the women who made these products. He said he’d take us to one of them and jumped in the car with us. We drove some distance, probably 10km, further into the park to the tiny hamlet of Kasbah Jamâa Bou Driss that had no more than six houses. He led us down a muddy path into a courtyard in front of a tiny house and there she was. A tiny, wizened Riffian woman of about 80, with tattoos on her forehead and chin, arms akimbo, watching us. Beside her were her granddaughter and small great-grandson. 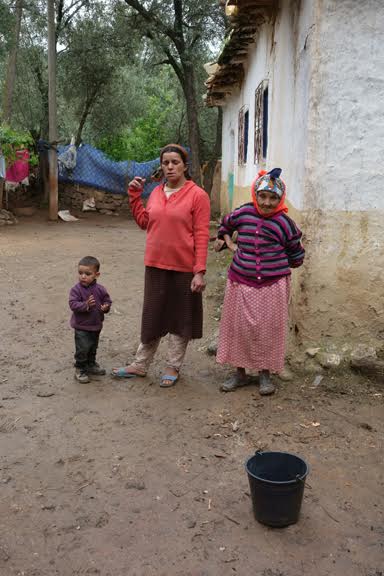 The old woman seemed pleased, if somewhat puzzled, that these strange foreigners were asking about her work and showed us what she’d made that day – dishes similar to the ones at Oued Amlil souk, for making couscous or bread. These dishes were stacked against the side of the house, cooling after being fired. David asked were the kiln was and we were led to the remains of a fire smouldering on the ground. The granddaughter demonstrated how the pottery was put onto the coals, a smoky branch laid across (accounting for the black scorch marks on the pottery). The ‘studio’ for this work was a small round frame in the corner of the courtyard. There are no tools, just perhaps a stone and rag or two. 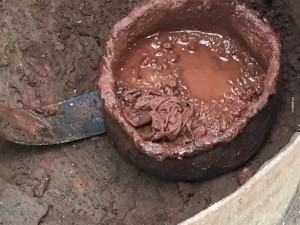 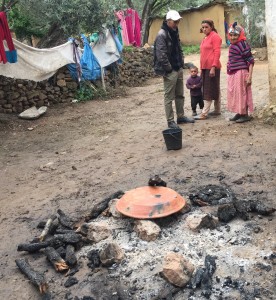 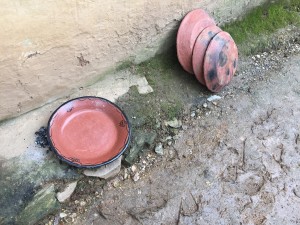 We were delighted to find this last vestige of a craft that will die with the old woman. But it was all somewhat drab and depressing; with her down-turned mouth, the old woman’s granddaughter looked browbeaten and poverty-stricken. It seemed to us that she had a very hard life with nothing to give her any ease, no labour-saving devices. Given the choice, it is unlikely that she will continue her grandmother’s work. At the other houses in the hamlet, the women all sat outside watching us. They don’t leave home much at all and probably hadn’t seen foreigners before. We waved as we left. 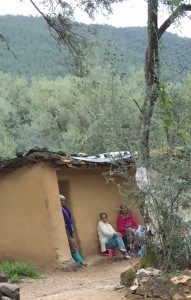 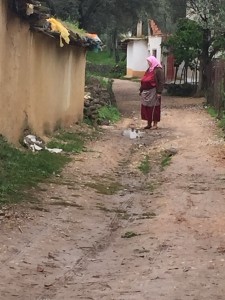 main street in the hamlet

Mostapha, our driver, bought a couple of dishes from the old woman, who charged him Dh13 (about one Euro) for each. Such pieces are not found in museums (except in Hammad Berrada’s collection which is yet to be put in one); they’re everyday pieces that break easily and are replaced cheaply. Their value is that they are hand-made (not thrown on a wheel, but coiled) and unglazed, and that they are made by women in the Riffian countryside (unlike all other Moroccan pottery, which is made by men), much as it has been done for millenia. It is a craft that won’t be around in ten years’ time.